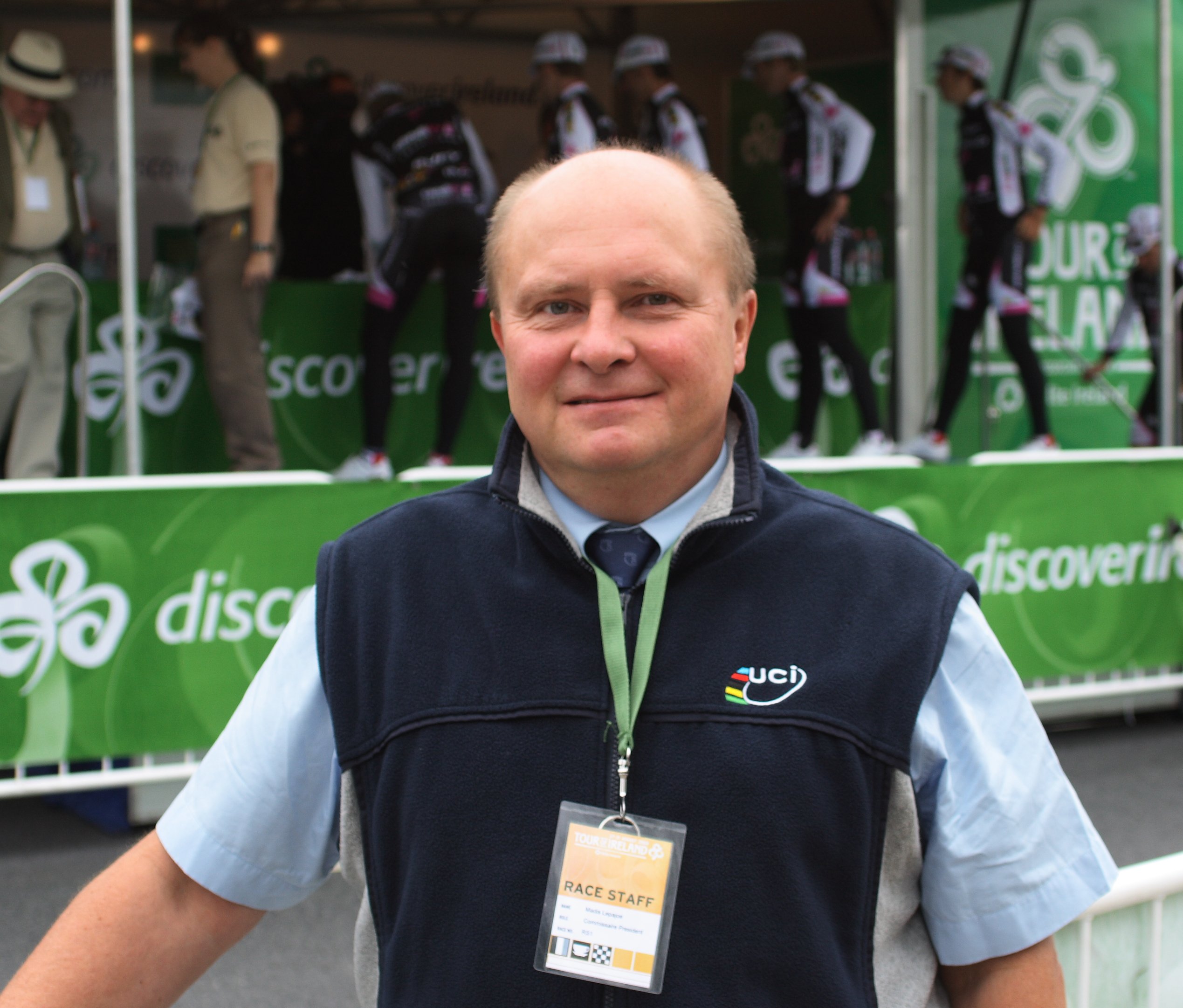 Posted at 23:19h in Uncategorized by galibier 0 Comments

Mostly never seen, rarely mentioned but with a view of the professional racing circuit that money could not buy. No event could proceed without the race commissaire.

In a dungeon somewhere in Switzerland, covered in cobwebs and folklore, exists the biblical 400-page UCI rulebook. Cycle sport’s blue jacket wearing judges are the only humans who have committed to memory all of its 25.2 trillion rules (estimated) and amendments.

Both the mystical rulebook and the commissaires exist to ensure fair play in all racing events, pro and amateur worldwide. They are the necessary part of the Professional cycling circuit, usually seen with their head sticking out of the first car behind the peloton. One of the UCI’s chief international, Pro tour commissaries is Madis Lepajoe from Estonia. In perfect English (thankfully) we interviewed Madis on the role of sheriff in the professional cycling ranks.

Did you race yourself?

I raced yes, but not at this level.  I was junior cyclo-cross champion of Estonia, and Baltic student road-race champion. Enough to give me an understanding of what they (pro riders) go through.

How long have you been a commissaire?

I came up through the ranks C, B and A grades at national level for 23 years in total. For the last eleven years I have been an international commissaire, and pro since the 2002 world championships in Zolder.

Are the exams difficult?

Not really, it is based on fairness and knowledge of protocol. The language can be hard if not your native tongue. In the 1960’s –70’s only French was spoken in all races. Now with the rise of the sport in Asia and North America, English is mostly used and you can take the commissaire exams in either.

What did you think of the ASO-UCI row?

I’m glad it has come to a positive solution, the conflict went on for about two years, but both sides are starting to demonstrate goodwill recently. It has been difficult as the ASO races (TDF, Paris Nice etc.) are being run with out international commissaires.

So these races are being run without UCI coverage, so no UCI points for pro riders?

Yes, in the past this has been a driving force and a mark of a rider’s ability and consistency. The cyclist’s points score would determine contracts, so for example if you won a stage in the Tour de France this year, no points would be awarded to your rankings. But the ASO races have such good TV coverage and exposure, and with pressure from their sponsors, the teams are left in the middle.

Objectively Madis, is one organisation more orientated towards the riders?

The conflict is not to do with the riders and I hope it doesn’t affect them so much. The conflict is between shareholders in a business (ASO) and an organisation of 180 national federations. So the UCI has to follow the will of it’s180 nation members, whereas only 6 member countries are siding with ASO. So the majority must win, but what is more important: cycling must win.

Do you carry the rulebook with you?

I don’t think there is a commissaire in the world that knows all the rules. I have read the book and know all the important ones, but I do carry it with me to all races in my computer, in case I need a reference.

What is your favourite race?

In every country the people and races are different. The racing is great in countries where cycling is popular, so the Tour of Belgium is fantastic to work on, but the Tour of Langkawi is my favourite. I have worked on it twice and there is great racing on hard roads with a different culture, and the five star hotels are nice too.

Are some races more exciting to watch as you’re in the hot seat?

Yes, take for example today’s stage; the first 25km were very exciting, then the next 100km were quite boring after the break was gone and the teams control the pace. Sometimes I’m afraid if I fell asleep, the riders would knock on the window! The classics are very exhilarating as the riders battle from the start, but in a stage race like le tour, the riders must save something and can’t go all out every day, its not possible.  The most exciting races I have commissaired on are actually international junior races. I have worked on a few in Italy and Poland; there is excellent racing and attacking from the outset.

What is the rule on sticky bottle?

The official rule is not there, but most commissaires say in their head ‘one-two-three’: Any longer and this is sticky bottle (taking a tow from the team car). A warning will be given and if it happened again, they can get disqualified.

Would you turn a blind eye to riders getting towed up after puncture, yet not if they are dropped?

Difficult one, the rules are there to protect the strongest rider’s victory. If the rider getting towed back after a puncture is not going to affect the race outcome of the race, I will not be harsh. If it is a critical time in the race or a split in the lead group, the decision has to be very strict: No sticky bottle, no slipstreaming, that’s what we are there to protect, the integrity of the racing.

Is the UCI evolving with technology?

The UCI regulations exist to give equal chance to all riders. For example a UCI directive says that bicycles must weigh no less than 6.8kgs. A team with a big budget, riding 6kg bikes with the most expensive and lightest equipment, has a definitive advantage over a smaller team with 8kg bikes. It also is a safety measure, the bike must be safe and secure and I think that already they are close to the limit of technology and structural safeness. If there is a crash, the team mechanics don’t bring wheels to the crash scene any more, they bring bikes, as the frames cannot withstand the impacts. I don’t see it being reduced much or that bikes may be made weighing 3kg.

Who is the most impressive rider in the peleton?

(Laughs) As a UCI comm. I don’t have a favourite.

And the hardest decision you have ever had to make?

Any advice to a new commissaire or someone starting out?

Takes a lot of practice and a lot of time to gain the experience. From your first race at local level, on to national and further on to international, I think a minimum of ten years. It means working, not once a year, but ten or 20 races a year: on motorbike, at finish, in car. Even though I am an international commissaire, I will still go to underage races to keep in practice and in touch with racing.