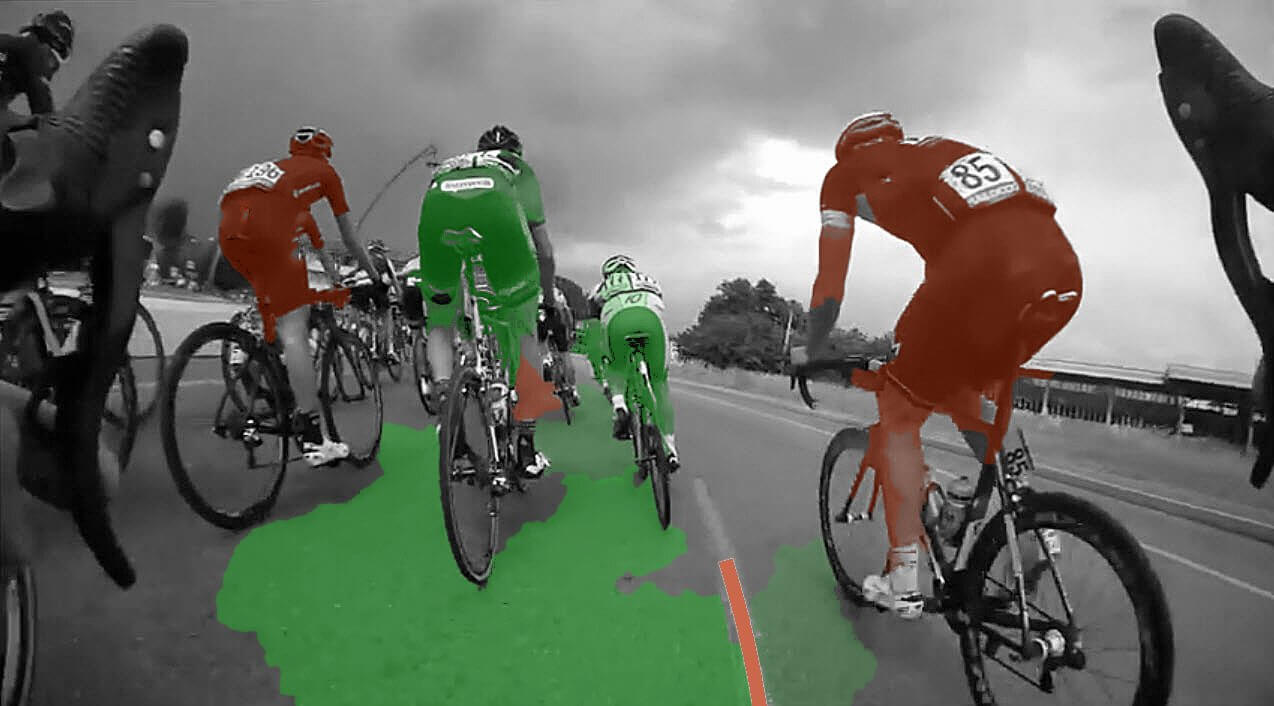 There is a fantastically bad movie called Battleships. Very good looking Navy officers fight off 8-foot tall, technology advanced, aliens, using only clenched jaws and an out-of-commission WW2 destroyer. Those said aliens have special targeting helmets that can automatically detect a threat and highlight it red. Passive subjects ahead, are highlighted green. During my life inside a peloton, I used similar technology to avoid the hazards of both holes and assholes.
The rolling road continually presents an entirely, unpredictable set of variables and entirely changes the very next second. The weather,  the attention of the guys beside me or the funding of the local council; All constantly shifting factors which somehow interact and affect how my day will end up. How any race finishes intact is a wonder and a compliment to the skill of the riders within.

When you are riding in a bunch, your eyes soft focus on an area between the wheels and rotating shoes: a conical shaped zone, 3 metres wide and 20 metres long. The area is being scanned for unseen obstacles, wet white lines and nearly-bike-size spaces to move into.

I have a snap shot of a place in time. A race in a thousand races and it haunts me whenever a wheel locks up in front or some lad overreacts at a cats-eye contact. I found out at that particular morning’s sign-on that a likeable lad’s wife had just left him and was holding the bars far too tight waiting for the race to begin. Last Saturday night he was trying a saddle that wasn’t his, so I don’t blame the wife. But for today, he is adding an extra threat level so I will (highlight red) avoid him as best I can.  The event begins, stage 2 of 4, in light rain. Everyone still has fresh legs. A few climbs in, the field has reduced by half. On a left hand corner, the rider in front leans with left crank at 6 and clicks the tarmac. The bump moves him 4cm to the right, but lets out a wail of As and Hs like a tiger had hold of his ankle. My hazard warning system paints him red and I get the wheel of the next rider heading forward on the outside. I fill a few available holes and now, I’m in the danger zone. At the front of the bunch with the 15 riders who must react to the constant missile attacks being fired by men who still think they can win. I don’t think I can win. The 4 km in the cavalcade after the last hill have left my legs dull and shaky. I fear if I get up out of the saddle they will fold. So I sit. Here surrounded by experienced and fitter riders – I’m the one to be avoided. It is an unwritten rule, if you are not ‘racing’ just following, stay out of the pointy end of the bunch to let the event flow.  I’m leaning Forward on the drops, fucked. It’s raining hard now. I scared myself with my left hand slipping off new, wet, vinyl bar tape. The rider behind me highlights me, red.

10 k to go, on a 100 metre rise, two wee lads attack.
The leading rider at the front of the bunch responds and it is three in the right hand gutter moving away.
I’m now rider two in the lineout and pretend to be invisible. Rider four loudly highlights my laziness. Of course he is right (but I will later stiff shoulder him into a door leaving the changing rooms hoping his bark is worse than his bite.)  I continue pretending to be a statue or a hedge as the break moves away. Rider 5 kicks and everyone responds. I’ve no acceleration left so increase speed as much as I can, mostly through prayer and make it onto the last wheel in a line of thirty riders on the hunt for the trio up the road and the win. We crest the hill and increase speed on the descent. The peloton gains momentum as riders confuse gravity with form. We close fast, in the rain, on the three up-the-road. Too fast. They give up in the headwind and are fanned across the road. The bunch train is doing 55kph and with tyre spray, only rider one and two know of the catch. Danger warning lights flash. I’m unaware of the break being brought back being 60 meters and 150 watts away from the front.  I only see the back hub of the guy ahead. Trying to find the middle ground between lots of shelter/little road spray from his back wheel, so sit out left, unaware.

The arrow of bunch catch the leading three on a bad bend. The first few riders in the lineout filter past at speed (I later find out) The third rider in the bunch impacts the leaders with such force he separates him from his bike and from the road. Riders four to ten are helpless and crash even before the first fuck is heard. Riders ten to twenty slam the brakes on the slick, wet road but are already leaning into the corner and fall. Everyone is sliding. Riders twenty to thirty are far enough back to look for the emergency exits. I select the ditch and click out of my left foot and am slowing nicely.

Then the guy on the marriage-ending weekend hits me from behind and knocks me into the mass of flesh and bikes whose combined resale value has dropped by 60% in the previous 4 seconds.
We slide. I see a car coming towards me sideways. I’m on a collision course
I think it was blue; the guy I pinned under the side of the Ford Focus swears it was green. The car gets stopped. Then it stops me sliding, quickly.

And here my memory slows. Under the middle of car between the wheels, wedging my mate, stuck tight. I look at him shouting as his leg is on the exhaust but hear nothing.  The soon-to-be-single-guy collided with the front driver’s wing and landed on the bonnet. There is a second of silence and I can feel pain and shock but breathe out alive. And other second of silence. The guy slides off the bonnet onto the road. Then the driver of the Ford….engages reverse. He can’t see us.

Just as the elderly driver got the bite point of the clutch, the wheels start to roll back, James-Bond-death-scene-style towards my hip. I claw at the tarmac for grip.

I’ve always loved motor bike Marshalls. Not only have they given up their day to keep us safe in a moving cocoon; their skill to move a machine through a bunch of riders, without killing anyone, is magnificent. It looks like he dropped out of the sky and landed with angelic, hi-viz wings. His hands explode the back windscreen and the power of his STOP command shook the earth, stopped the rain, the car and the unwritten headline “Two killed in bike race smash”
My only injury came as the Marshall pulled me to safety and left my shin skin on the Ford focus.

My memory is frozen as I stood there looking at the broken mass of bikes and bodies. One moment in a million was the crash. All the variables lined up and everything was highlighted in red, except the beautiful green marshal.
In a thousand other timelines of that race the break sticks and I have skin on my leg or the Ford was going 3mph faster and I am dead or rider two didn’t cheat on his wife and I watch it all unfold from the ditch.