20km to go and I reach around and slap the right hand, rear pocket and feel only me. Not too many left in the bunch. I’m swinging last man and hanging. Reach around with the left hand, hoping. 30 years of racing and I never organised my food into categorised pockets. Think there is some Christmas cake that I smeared honey onto last night, but it could be a fucked up fig roll or nothing.

Feeling outside the pocket, there is something there, soft, something. It could be a melted fun-size Snickers, but I don’t get time to investigate as some young lad with dreams, has attacked and the elbows go 90 degrees again. Not much left in the tank. My legs can still knock out 300 watts, but If I get out of the saddle, they will fold like a new born giraffe.
My brain thinks what ever is in the pocket will save me- I reach around to the pocket and find a gel. A glorious, PowerBar gel. Gold, foil  gleams in the sunlight. A purple one too – the icing sugar-tooth rot has got caffeine chemicialized into it- to get me home. I rip off the top with my teeth and spit it on to the road and squeeze the goo into my decaying carcass. I chuck the foil into the grass verge and grab the drops. Back in the game.
Except I’m not. I wasn’t in the game. 5 minutes later on the last hill, I was gone. Team cars passed and no 35grams of cigarette-tasting-sugar is going to change that. Not only was my race over, so was a little bit of my soul. The Gel wrapper was now in two bits on the road side and I was never, have never, gone back to get it.
Most of us would never chuck an empty coke into the hedge, (If you do- both you and your parents need a wee slap). Something about ‘in a race’ takes away social responsibility with the excuse of the battle. Bottles over hedges, HiFive bar wrappers fluttering from your mouth…..with your dignity.
Average Jo racing 100km race will put two or three gels in his pockets. Or if you’re 15 years old or think your really good, have the gels sticking out of your shorts leg. The ‘Jo’ that hasn’t trained enough will pack 6 gels in; thinking that they are a reserve parachute. 80 riders in a race, thats 2-300 wrappers after a single event- as ‘most’ of us do it, did it, will do it.
I think we should stop it. It is not acceptable. Yes, the pros do it but they are mostly brainless and have a trash van cleaning up after the broom waggon has past. It doesn’t sit with our own view of US cyclists. We sit astride our beautiful machines, silently caressing the lanes of the land, leaving no pollution.
We are the best humans, just below UN Aid workers and PeaceKeeping soldiers. We are fit, fast and generally friendly. We are not lazy and we don’t leave shite behind. We leave only a faint whiff of embrocation, tyre rubber and the turned heads of admiring people, wishing they could be in our gang. 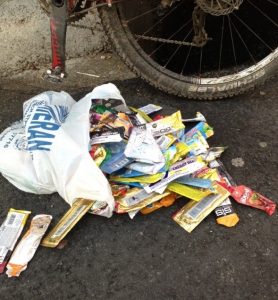 (After a national race last season, Johnny Mc Cabe rode around the course and collected this)

So Stop it. Tell your mates to stop it and point out those who do. It’s worse than scrubbing and then sprinting.
I emailed the major producers with the burning question- but it is the elephant in the room for them. No biodegradable packaging – anytime soon. It is not up to them though: It is up to us, the end users. An empty gel wrapper weighs 1-2 grams. So weight isn’t an issue. Stuff it up the front of your jersey or back in the pocket. It is not the world’s end if a bit of gel gets onto your jersey. You are going to wash it.
Gels are rubbish anyway.
Eat food, and pack a caffeine one for the proven benefit on the last lap.
A gel contains 100 calories, on average, across the brands.  You are burning 800 to 1000 in an hour while racing- so at full tilt- there is 6 minutes worth of fuel inside one. You body needs 1-2 grams/per kilo/ per hour of multibranched polysaccharide glucose (click and a wink) during an endurance event. Food is the answer. Find the nutrition that works for you, for your body, for the event. Gels are a part of a nutritional plan, but they are not a nutritional plan.
They rot your teeth, your stomach and if you drop the wrapper-  your soul.

5 thoughts on “They don’t decompose- you do.”